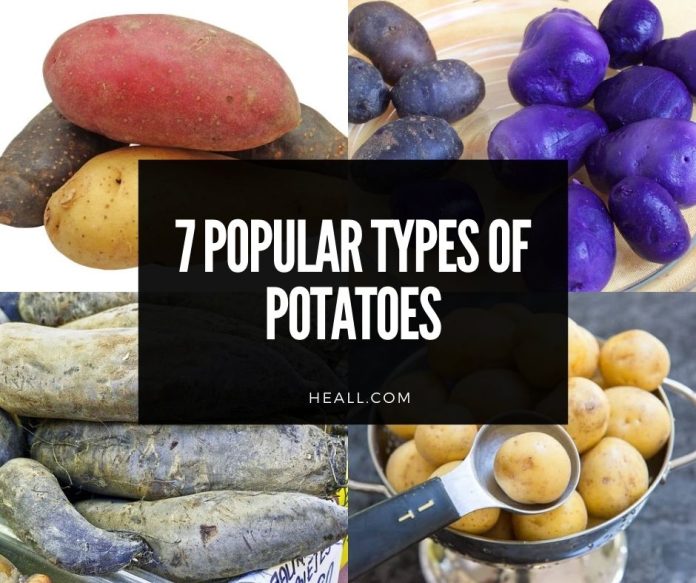 Almost everybody loves potatoes and they’re so incredibly versatile. Whether you like them baked, boiled, steamed, roasted, fried, or mashed, the applications for this culinary delight are virtually endless.

Potato lovers won’t be surprised to hear that potatoes are one of the most popular grown and consumed crops in the world. And, there are as many different varieties and types of potatoes as there are ways to prepare them.

Believe it or not, it’s estimated that there are more than 200 varieties sold in the US alone. And, each one falls into a specific category based on its texture and what it’s best suited for. So, how do you know which one to choose for your recipe?

Here’s our guide to the different types of potatoes and how to choose the right variety based on its texture, taste, and how you plan to prepare it.

The Three Categories of Potatoes Every Cook Should Know

Every cook should know the three main categories of potatoes, how they’re different, and what preparation they’re best suited for.

Waxy potatoes have a thin skin, a smooth texture, and they’re usually on the smaller, rounder side. They are high in moisture and sugar and low in starch. Popular varieties of waxy potatoes include the Red Bliss and the French Fingerling.

When considering potatoes for a recipe, it’s important to note that waxy potatoes hold their shape well after cooking. They’re ideal for roasting and boiling, as well as for recipes like potato salad, scalloped potatoes, and gratins. Choose them for any preparation where you want them to stay intact.

Starchy potatoes are sometimes called mealy potatoes, and as you probably already guessed, they are high in starch. This category includes popular favorites like Idaho potatoes, Russets, and most sweet potato and yam varieties.

Starchy potatoes are low in moisture. They’re an excellent choice for masing, boiling, frying, and baking. When considering potatoes for a recipe, keep in mind that starchy potatoes flake apart easily after they’re cooked. They won’t hold their shape as a waxy potato does, but they’re ideal for preparations where you want a fluffy texture after cooking.

Somewhere in the middle, you’ll find all-purpose potatoes with characteristics of both waxy and starchy potatoes. They hold their shape well, but they’re less starchy than a starchy potato. They’re also fluffy after cooking.

All-purpose potatoes can be used in just about any type of potato recipe, including mashed potatoes. Yukon golds fall into this category.

The Most Popular Varieties and Types of Potatoes in the US

Here are the most popular potato types and varieties in the United States, as well as their characteristics, flavor, and what kind of recipe they’re best suited for. 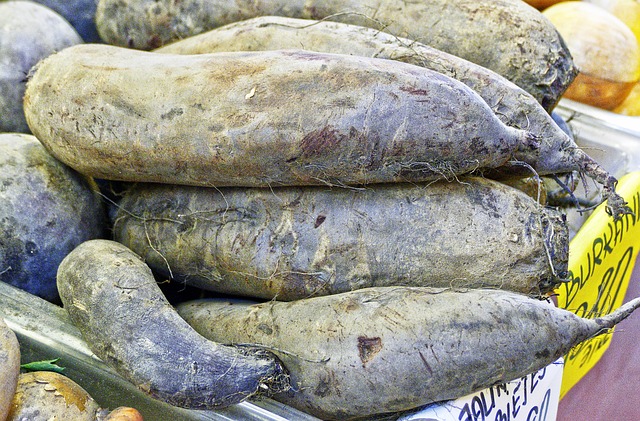 Yams and sweet potatoes are technically starchy root vegetables, not potatoes. They are part of the nightshade family, but they’re prepared in much the same way as starchy potatoes and often get lumped into the same category.

Sweet potatoes are usually sweet and have moist orange flesh. Their skin is quite thick, and many people prefer them peeled for cooking. The most popular types are oblong with pointed red tips and reddish-brown skin. There’s also a white variety that has tan skin and yellow flesh that’s on the drier side.

Both varieties work well for mashing, pureeing, boiling, steaming, baking, and roasting. They’re well suited to savory dishes, but they are also sweet enough to use in baked goods like bread, muffins, and pies. Some cooks even spiralize them to make noodles. Or, you fry the skins for a crispy snack that’s loaded with fiber and vitamins.

Yams aren’t as common as sweet potatoes, but they have similar characteristics and can usually be substituted for sweet potatoes in a recipe. The Jewel Yam is a common variety to look for at farmer’s markets that’s delicious roasted or baked. The Hannah variety is very similar to Jewel but has lighter skin and flesh.

If you want to try something a bit different, look for the Japanese Sweet Potato. It has pinky purple skin and white flesh with a nutty, sweet flavor. It’s fantastic baked, steamed, or grilled. 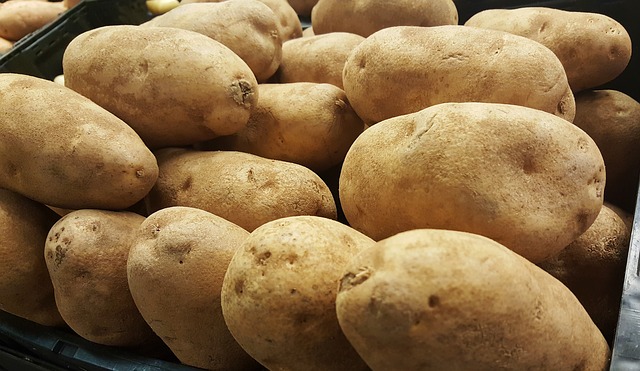 Russet potatoes, also called Burbank or Idaho potatoes are the perfect baking potato. They’re the most popular type of potato grown in the US.

These classic potatoes are high in starch. They’re also large potatoes with an oblong shape and a thick, rough, brown skin.

Their flesh is mealy but becomes fluffy after cooking. This variety of potato is best prepared fried, baked, or mashed. You can’t go wrong with Russets for masing because they fall apart easily after cooking and whip up to a light, fluffy texture. 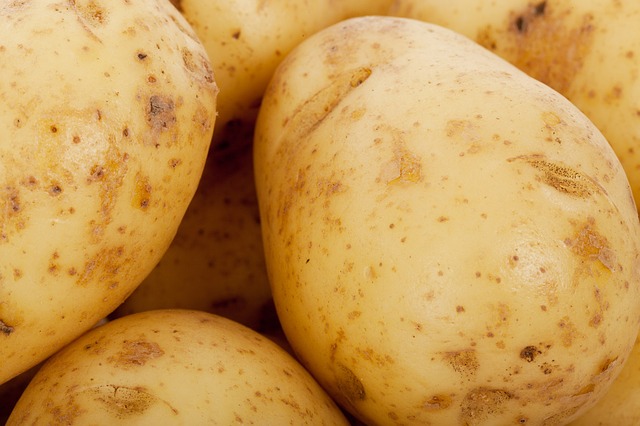 White and yellow potatoes are all-purpose potatoes. They can be oblong or round and usually have thin skin and waxy white or yellow flesh. Yukon Gold is the most popular, but White Rose and Finnish are also readily available.

These medium-sized potatoes are prized for their tender skin and creamy flesh, often with a rich buttery flavor. They’re very versatile and can be used fried, baked, roasted, or boiled. Or, if you want to try something different, mash them with cauliflower for a rich, nutty side dish that’s lower in carbs but still fluffy and delicious.

White and yellow potatoes have a thin skin that crisps up nicely when fried, so they’re also a great choice for homemade potato chips. Yukon Gold, German Butterball, and Kennebec are three of the most popular varieties in this category. They’re all very versatile, all-purpose varieties to keep in the pantry for just about any purpose.

Here are some favorite varieties to look for: 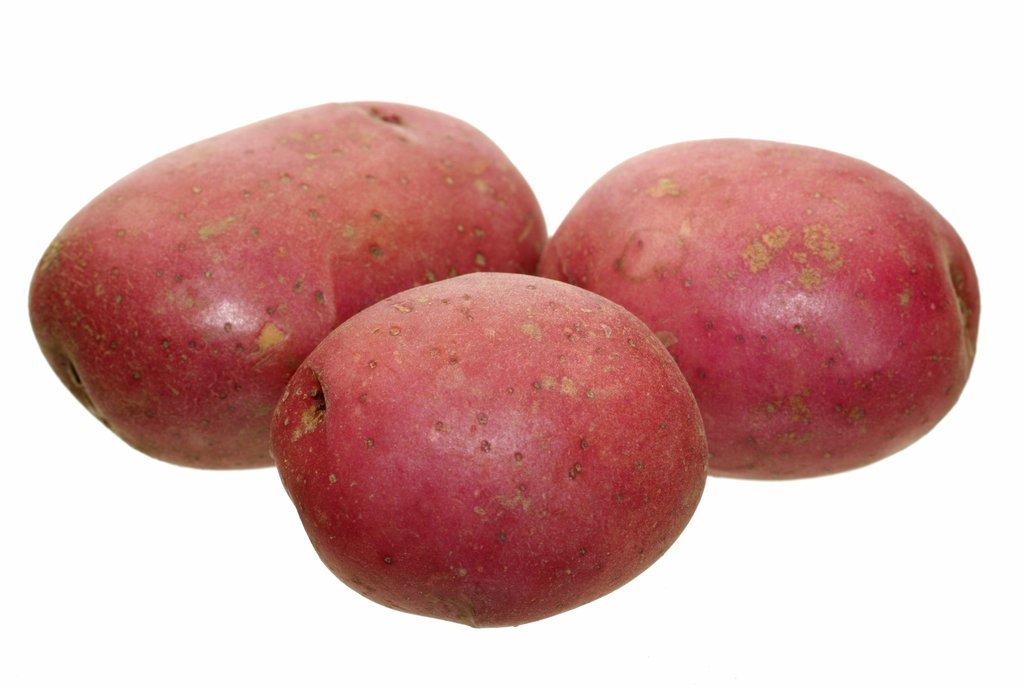 Buy it from Amazon

Red potatoes are one of the most waxy types of potatoes available. They maintain their shape well during cooking and are especially suited to salads, boiling, and roasting.

Red potatoes have a thin skin that doesn’t require peeling. The inside of a red potato is usually bright white and has a dense texture after cooking.

Red Bliss is one of the most popular red-skinned varieties. It has moist, white insides and a high sugar content, making it ideal for boiling. This potato can turn gummy if mashed, and it won’t get crispy when it’s roasted or fried. It does, however, make a great choice for potato salad or roasting with chicken or beef. 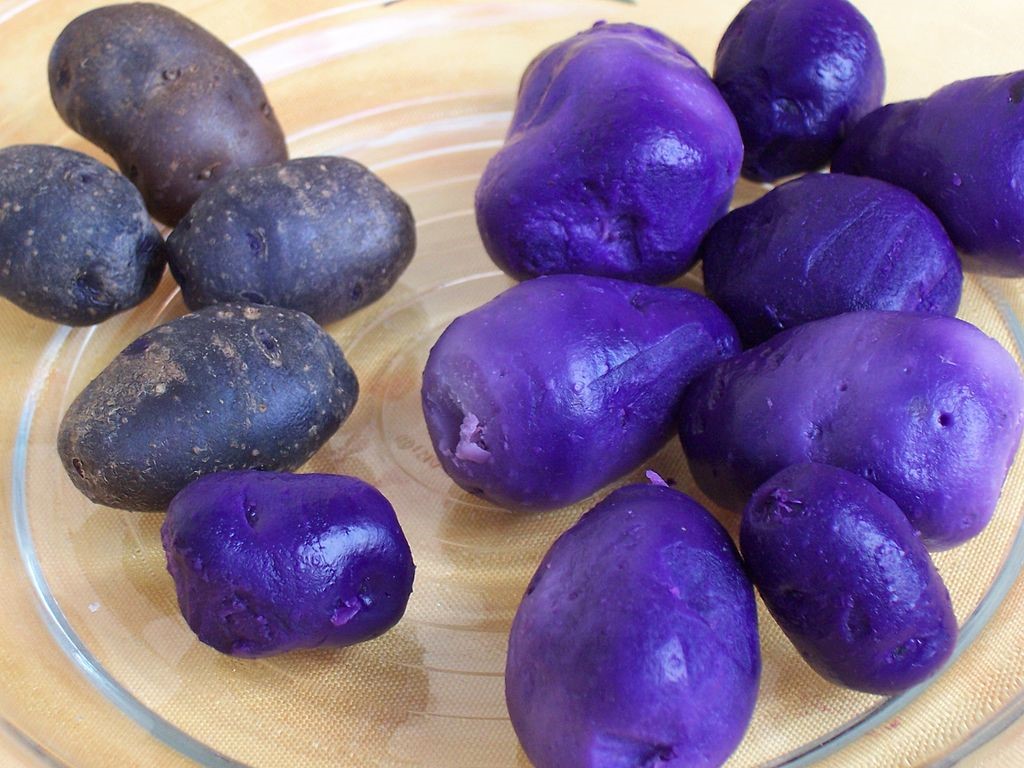 There’s more to love about purple and blue potatoes than their vibrant, unique color! Purple and blue potatoes are all-purpose, with a thin skin and a slightly nutty, earthy flavor. Their flesh is starch and firm, making them well suited to steaming, simmering, boiling, or roasting. The larger ones are great for mashing and baking, too.

The flesh of purple and blue potatoes lightens as they cook, while the skin darkens. These potatoes are rich in anthocyanins, which means they contain more antioxidants than other potatoes.

Some favorite purple varieties include Purple Viking, Purple Peruvian, and Purple Majesty. Adirondack Blue is a popular blue-skinned variety that has violet flesh. 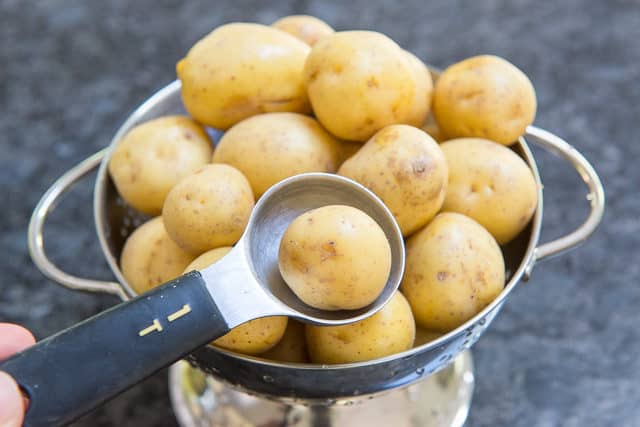 You may have come across baby or petite potatoes in your grocery store and thought they were a type of potato all their own. However, baby potatoes are actually a size classification.

Any type of potato that’s harvestable when it’s small can be sold as a baby or petite potato. Even in this tiny form, the potato will have the same qualities as its full-sized counterpart.

Other Things to Know About Potatoes

How to Choose the Best Potatoes

No matter which type of potato you’re considering, there are some things you should keep in mind to ensure that you’re getting the freshest potatoes with the best flavor.

First, ensure that the potatoes are firm and heavy. They should be clean and free of soft spots, cuts, or cracks. A few visible eyes are fine, as long as there are no sprouts.

Avoid potatoes with a green tint to the skin. This indicates that they’ve been exposed to sunlight and have begun to release solanine, which is toxic in large amounts. Potatoes with green-tinged skin will also be bitter, so you wouldn’t want to use them in your cooking anyway.

Whenever possible, choose locally grown, organic potatoes. Thanks to urban farming and advancements in agriculture technology, locally grown produce is becoming readily available just about anywhere, even in the city. Locally grown potatoes will be fresher, which means better flavor and a higher nutritional value.

How to Store Your Potatoes

Just like any other type of produce, the way you store your potatoes will have a dramatic impact on how they taste, how much nutrition they retain, and how long they’ll last in your pantry. Ideally, potatoes should be kept in a dark area that stays at around 50-65 degrees. Heat and humidity will lead to sprouting or rotting.

Refrigeration should also be avoided because it will cause the potatoes to wrinkle and get mushy. In fact, temperatures below 40 degrees will convert the starch in your potatoes into sugar. Not only will they taste off when you cook them, but they’ll also be more likely to burn when fried. They may even develop a gray or streaky appearance after cooking.

How to Clean Potatoes

Most potatoes will still have some dirt on their skins when you purchase them, and that’s perfectly normal. Give them a light scrubbing under cool water and you’re good to go. Or, you can let them soak in a sink full of water and the dirt will fall to the bottom. They’ll just need a quick rinse before cooking

If you’re going to peel them for use in a recipe, before sure to immerse them immediately into cool water. This stops the enzyme action that causes peeled potatoes to brown on the surface.

The Health Benefits of Potatoes

Potatoes get a bad rap for being high in carbohydrates, but they actually only have about 12% of the recommended daily value. In fact, they contain healthy, complex carbohydrates that are easy to digest and almost no fat.

They’re also one of the most nutritious vegetables out there. They’re also loaded with vitamins and minerals, including potassium, which many people are lacking in their diet. They’re also rich in B6, a coenzyme that helps the body break down and use carbohydrates.

Potatoes also contain high amounts of vitamin C and other B vitamins, including niacin and thiamine for energy and metabolism.

There are more than 4,000 varieties of potatoes in existence throughout the world, so you’ll never run out of new varieties to try. The ones listed above are the most common in the United States, so you should be able to find them at your local farmer’s market or specialty grocery store. We hope this guide inspired you to get out there and try something new!

13 Proven Benefits, Uses and Side Effects of Coconut Oil

An Apple a Day Really Does Keep the Doctor Away