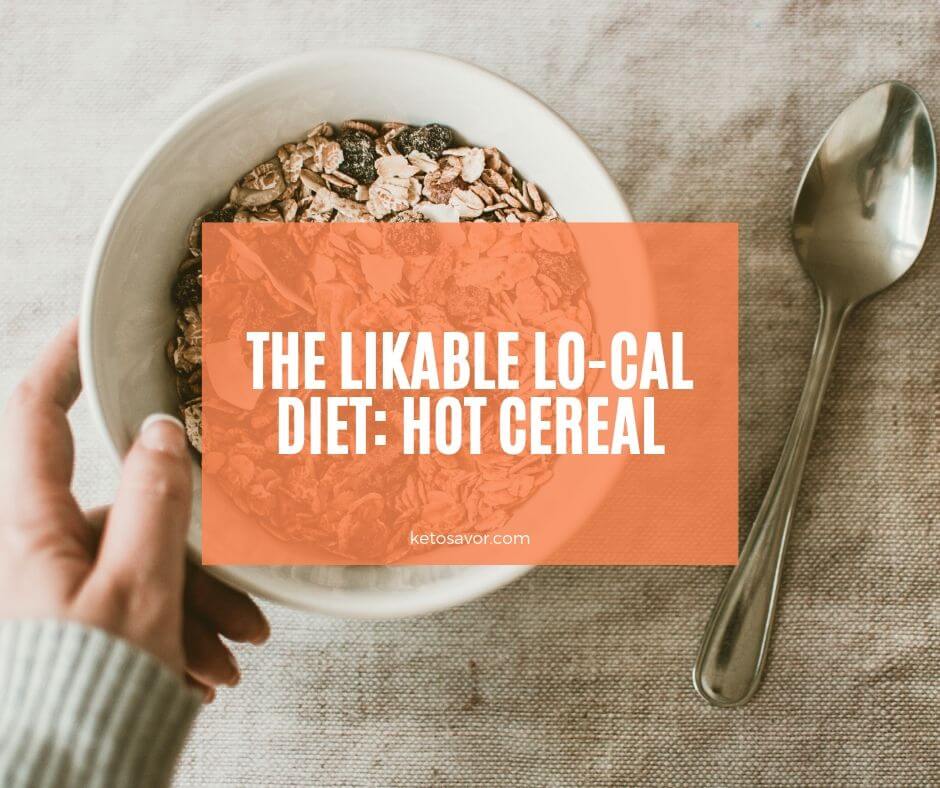 Staying under 1,200 calories a day is just a matter of choosing the most satisfying lo-cal foods you can, so meet your new favorite breakfast: Oatmeal!

Welcome back (assuming you read the introductory column for this diet). Let’s start at the very beginning of the day, a very good place to start. Breakfast!

Do the Math, Pace Yourself

One of the keys to making this diet go by smoothly is proper pacing throughout the day. Some of you math heads out there might hear “1,200 calories a day” and immediately calculate that down to 400 calories per meal. And sure, that’s one way to go, but it doesn’t give you a lot of wiggle room if you get hungry between meals or before bed, or if a comely neighbor shows up with homemade brownies.

On the other hand, what if you can keep breakfast down around 200-250 calories, and hold off eating again till lunch? Now you have about 1,000 calories to play with from lunchtime to bedtime, which is almost too easy. So how to do that, you ask? One word…

Which, as we all know, comes in two forms: Hot and cold. There are plenty of good cold cereal options that we’ll examine in the next column, but my strongest recommendation is for hot cereal, which I find far more filling, as well as offering more opportunity for personal modifications.

So let’s talk oatmeal. Here’s the good news: It’s hot, it’s dense, it’s good for your heart, it’s easy to make, and, most importantly, it’s crazy lo-cal for the volume of food you get. Specifically, one dry half-cup (40g) serving of oatmeal, which yields a nice big piping-hot bowl of it, is 150 calories. Across the board, no matter the brand or the type, that’s pretty much the neighborhood. I really don’t see the advantage to that “instant” oatmeal that comes in packets, since regular oatmeal can be microwaved in under two minutes, but if that’s what floats your boat, that generally weighs in at 160 calories per 45g packet, or 130 calories per 35g packet, so barely any difference there. Which brings me to…

Now is as good a time as any to mention how important it is to pay attention to the details when reading labels. The number of calories per serving is meaningless and often misleading without noting the serving size and/or servings per container. Don’t assume, for example, that a can of anything is one serving just because that’s how cans of soda are labeled; most cans of soup, for example, contain two servings, and many canned vegetables contain 3 1/3. So pay attention!

So we have McCann’s Irish Oatmeal, which sounds like a dietary winner at 100 calories per serving, but each serving is only 28 grams, which is to say that a 40 gram serving, like the basic oatmeal, would be just under 150. On the other hand, maybe McCann’s is extra hearty, so 28 grams of it actually IS just as satiating as 40 grams of the regular stuff. Feel free to weigh in on that; that’s what the comments section is for. That and ridiculing me.

(This is as good a time to assure one and all that I am not associated with any company, any product or any brand I mention by name here. If I specifically recommend anything, it’s for the sole reason that I’ve tried it and like it. I don’t write infomercials. Not YET, anyway.)

Then there is McCann’s “steel cut” oatmeal, which SEEMS to have the same numbers as ordinary oatmeal (150 calories/40g), but the serving size is only 1/4 cup, not 1/2. Which is to say that it is apparently twice as heavy. I assume it’s all that steel weighing it down.

In any event, the point is, a good-sized serving of oatmeal is going to be in the lovely area of 100-150 calories. Other variations on hot cereal like Malt o’ Meal and Cream of Wheat are a little further up the scale at 170 calories per 1/4 cup, but they too are reasonable options.

So that’s the good news about oatmeal. The bad news is…it tastes like oatmeal.

Hats off to you if you like your oatmeal plain and untampered; you get to take off the rest of this column. Most of us, myself included, are simply unable to forgo things like “flavor”, so we’ll add several (but hopefully not ALL of the following to it:

Some entirely safe items in there. Others…not so much.

Seasonings and spices like cinnamon and salt: Knock yourself out.

Vanilla extract: At 12 calories per teaspoon, pretty safe, since a few drops is generally all you’d use.

Protein powder: This will get it’s own column someday, since they vary so much in content. All I’ll say for now is that Muscle Milk, at 135 calories/scoop, is not your best bet.

Honey: 60 calories/teaspoon. Uh, no. Okay, maybe a taste of honey, but that’s it.

Peanut butter: 105 calories/tablespoon. As a lifelong PB devotee, I find it extremely hard to resist throwing at least a little in there, but man oh man, that’s a lot of calories. Toss a tablespoon-sized glob in indiscriminately, and you’ve almost DOUBLED the calorie count for the bowl. Just be conservative about it. A 35-calorie teaspoon should satisfy your jones. Incidentally, “reduced fat” peanut butter is barely an improvement (95 calories/tablespoon).

Sugar: 15 calories/teaspoon, which is tolerable, but even better would be a packet or two of zero-calorie Splenda. (I’ll concede here that artificial sweeteners are an acquired taste, and in some cases do more harm, taste-wise, than good. I’m looking at you, Sweet n’ Low).

Fruit: Again, this is a category worthy of its own column someday, but I’ll say right up front that berries are going to be among your best friends on this diet. Strawberries are about 2 calories each, blueberries are 1 calorie per gram, and basically, you’re going to want your fridge stocked to the gills with these things. Bananas…105 calories each. Stick to strawberries. Strawberry jam, incidentally, is 50 calories per tablespoon, and even the low sugar stuff is 25 calories per T, which isn’t so horrific, but again I say: Stick to strawberries.

Butter: A pat of butter, like you find on restaurant tables, is about 20 calories, so again, it’s actually not as bad as you’d think…

But one thing I’d add here is that while each individual item may not add that much on its own, the combining of all of them can get you into trouble. A dash of sugar, a spoonful of peanut butter, a pat of butter, a few drips of honey, some banana slices, and that 150-calorie bowl of oatmeal is suddenly upwards of 250 calories… which is STILL fine, but the point is, that’s 100 calories you used on making your oatmeal more palatable, but not really more filling, when you COULD have used that on, say, a 100 calorie bag of popcorn as a late afternoon snack. Doesn’t that sound WAY better?

So generally, I’d recommend keeping that list to the bare minimum and save up those calories for when you really want/need/crave them.

And Then There’s Milk

Finally, we address those of you who prefer a creamier oatmeal by making it with milk instead of water. When I make oatmeal in the microwave, I use about 3/4 cup of water, and it comes out just right (after slightly less than two minutes. YMMV.). The equivalent amount of whole milk would be about 120 calories, so that’s not what I’d recommend, but if you really need to go the milky way (thank you, we’ll be here all week…), there are lower-calorie alternatives, summarized as follows:

Almond milk: 60 calories/cup (or go with the unsweetened version for only 35!)

Personally, I’d rather use water and save the milk for a protein shake to wash it all down with, but milk, protein shakes, and beverages in general are all columns for another day. Next time, we’ll address the other side of the coin: Cold cereals. For now, I’ll simply say: Enjoy your oatmeal, try experimenting with different additives, and if you can, steer clear of the really dangerous, ultra-sweet ones like honey. That stuff can be a real cereal killer.

Effective Ways To Have Your Pre-Baby Body Back

4 Tips On How To Work On Losing Weight