Home General Healthy The Benefits of a Low Carb Diet, Plus Meal Plan and Tips 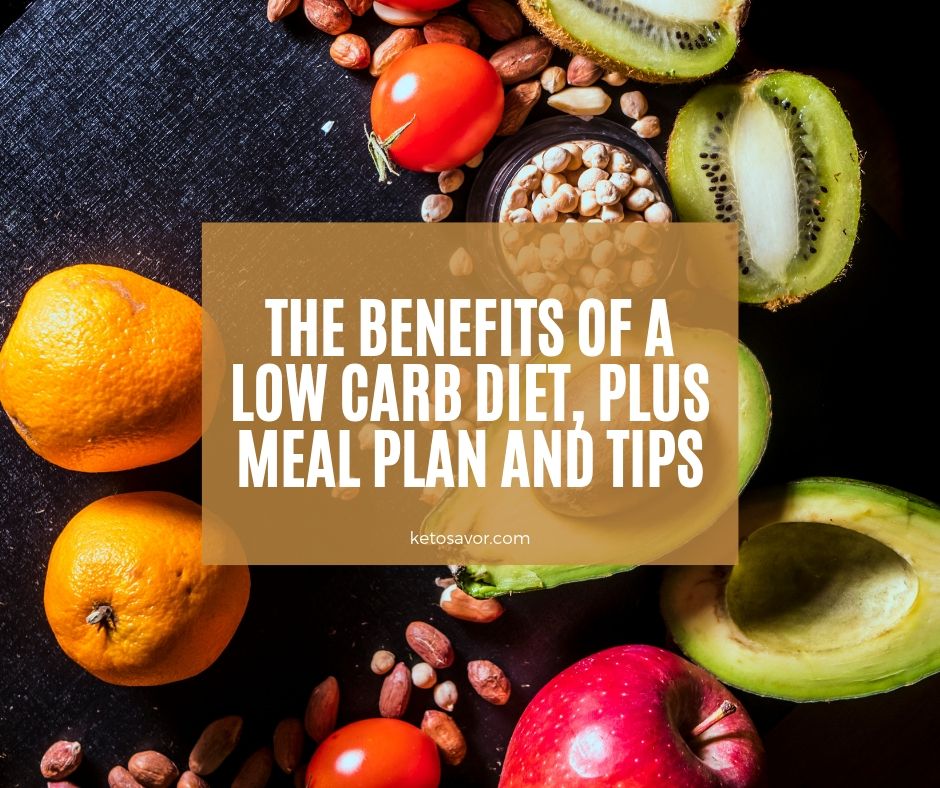 Low carb diets consist of someone eating very low amounts of net carbs each day, usually 20 to 50 net carbs. Net carbs are the total amount of carbs in a food item, minus the fiber. People who eat a low carbohydrate diet notice that the weight comes off much quicker than people who eat a low fat diet.

How Does a Low Carb Diet Work?

Eating low carb keeps the blood sugar at a steady level, which reduces hunger and cravings. Low carbohydrate diets also prevent the body from storing fat. Because the body typically uses carbs for fuel, when someone partakes in a low carb diet their body only has fat to burn as fuel. This is a state known as ketosis, which occurs three to five days into a low carb diet.

The Benefits of Eating Low Carb

Ketosis is the main benefit of eating low carb. People who are in a state of ketosis typically feel very little hunger, no cravings and have high energy. They feel that they are more easily able to exercise, which aids in their weight loss.

When eating a low carbohydrate diet, many people notice a weight loss of two or more pounds a day during the first week or two. While the initial weight loss is water weight, once someone is in ketosis they can be sure that they are burning off body fat.

The Challenges of Eating Low Carb

Eating low carb can be very difficult during the initial one or two weeks. During this phase of the diet, people may feel tired with low energy and have some cravings. Some people report feeling sick during this period of time. Usually, after five to seven days these feelings leave and are replaced by high energy and low appetite. Exercising daily can help to relieve the negative feelings and move the body quickly into ketosis.

Some people have a hard time with low carb diets because they feel that there aren’t enough food options. With enough research, it is easy to see that there are a wide variety of food choices, including low carb alternatives to popular foods like bread and chips.

An example of a low carb diet in one day is as follows:

What about Low Carb Food Alternatives?

Many companies now offer low carb alternatives to popular foods. There are varieties of low carb or zero carb breads, tortillas, crackers and pitas. There are also low carb pizza crusts, cookies, muffins, donuts and biscotti. In place of chips, there are fried cheese snacks that are seasoned with the same flavors as popular potato chips. People who enjoy juice can now find sugar free options that contain zero carbs. These are a good choice as long as the dieter is able to limit herself to a serving size and not over-indulge.

It is always best to consult a doctor before beginning any diet. People who want to eat low carb should do their research to find the best diet plan for themselves and figure out which foods they can and can’t eat while following a low carb meal plan. After a few days or weeks on this diet, most people find the weight loss success to be motivation to keep going. Eventually, low carb becomes a lifestyle instead of a diet.

How To Organize A Well-Balanced Diet For Your Family

4 Ways To Include Whey Protein In Your Diet